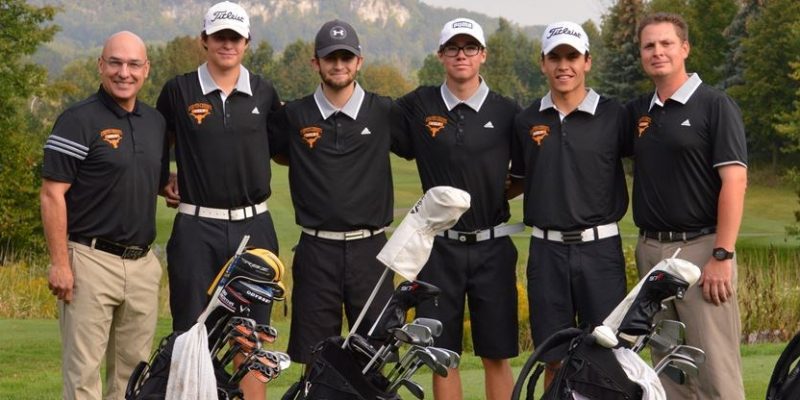 A year after narrowly missing out on an OFSAA medal, the Corpus Christi Longhorns returned to finish the job.

Corpus Christi finished with a two-day total of 233 at Kingsville Golf and Country Club to finish third at the Ontario Federation of School Athletic Assocation championship. The Longhorns finished seven strokes behind Brooklin, which edged Richmond Green by a stroke for the overall title.

“For three of them, it’s probably their last high school event, so it was cool to see them get there,” said Longhorns coach Carl Van Landschoot of the trio of Marcus Khaw, Matt Flood and Ben Honda, who missed out on a bronze medal by two shots last year. Joined by Colton Peak this season, the Longhorns earned their spot at OFSAA by defending their Golden Horseshoe Athletic Conference title.

“We knew this was probably our best chance to leave Corpus Christi with a win,” said Khaw, who followed up an opening round 75 with a one-under 71 on the final day to finish fifth overall for the second year in a row. “We feel like we could have done better, but the conditions were tough, so to finish third, only a few shots back, felt pretty good.”

“Third in the province is a significant achievement,” Van Landschoot added.

Khaw, who birdied the 18th hole to defend his Golden Horseshoe title, played his way into contention for an individual medal at OFSAA. He said the wet conditions took away one of his biggest advantages — his length off the tee — while he also struggled with his putting in the early going.

“I wasn’t able to take advantage of the par 5s like I usually do,” he said. “A lot of the putts I hit were on my line, I just read them wrong. Then we had a two-and-a-half hour delay and when we went back out, I made a double bogey.”

Sitting in 14th after the opening round, Khaw fired a 71 on the final day to move up to fifth, six shots behind Courtice’s Ethan Caldwell, who won with a final round of 67.

Corpus Christi teammate Matt Flood turned in back-to-back rounds of 79 to finish tied for 47th in the field of 120.

“Matt gave us two very solid rounds. It’s not easy to shoot in the 70s both days.” Van Landschoot said of the feat accomplished by less than a third of the field.

Ben Honda, who earned Burlington Invitational and Halton titles during his high school career, shot rounds of 78 and 83 and Peak shot 87 and 83.

“Ben played really well for us at GHAC (shooting a 75 to finish third). He had a tough second day at OFSAA, but he accomplished a lot over his career,” Van Landschoot said. “Colton had a tough finish to the first round — he put two balls in the hazard on 15 — but he showed a lot of strength of character to come back the second day.”

This article was originally posted in the Burlington Post by Herb Garbutt.